Coach Chris, as he is often called, has been with AccesSurf since the very beginning. After nearly a decade of going above and beyond for AccesSurf and now for the Hawaii Adaptive Surf Team, we’re so very proud to honor Chris Courtois as our volunteer of the year. This recognition comes at a an exciting time, as he and Team Hawaii prepare to head off to La Jolla, CA to compete in the World Adaptive Surf Championships.

At our Day at the Beach events, Chris is one of our surf schedulers, which is one of the most challenging roles on the beach (big shout out to Will as well, his co-surf scheduler!). As Coach of Team Hawaii, he is constantly working with the team – providing them with mentorship and guidance, practicing all over the island, and competing at the various HSA events held island wide.

Thank you again Coach for ten years of dedicated service to AccesSurf! With that, here’s a word from the man himself,

Aloha and good morning all,  first I just want to say thank you so much.. AccesSurf  has been a huge part of the Courtois ohana . My wife Miki has been a great support over the years while my daughters Namika and Luna were practically raised at the Day at the Beach program, in the tents and in the water. I am proud to have helped with such a great organization. Being a part AccesSurf has brought many new adventures and  the opportunity to work along side a great group of friends and volunteers. Now the Hawaii Adaptive Surf Team is preparing for the second Adaptive World Championships next week in San Diego, CA. We have been training and competing all year, getting ready to proudly represent Hawaii and AccesSurf. Thank you again. 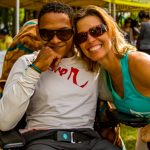