Well it is with a heavy heart that this month we bid a hui hou (for now!) to two of our most favorite humans in the world, Jason and Mariah. These two amazing humans are heading off to Alaska and elsewhere to adventure for a while and will return home to the islands in a few months time.

Words feel inadequate at the moment, but they will have to do. We LOVE Jason and Mariah, what else can we say. Jason as you know of course as our fearless photographers, his images have been warming the hearts of our AccesSurfer’s and our volunteers for years. Mariah, who has also been volunteering with us for years as Water Safety and as a Pusher shared our office space for many months. Both of them are truly a part of the family, and always will be.

We know they will be returning in a few months time, but it is always difficult to bid those you love farewell.

I first went to DATB when visiting Jason on Oahu Sept 2015.  Jason had asked if I was interested in going and volunteering for the day.  I was completely intimidated as I had little experience being in the ocean but still very interested as Jason talked a lot about this group he was involved with.  I very clearly remember that first DATB – volunteer orientation being led by this exuberant guy who was clearly very into using A LOT of sunscreen, so many smiles and friendly people freely coming up to introduce themselves.  It was easy to jump in and start helping as a water safety on the beach.  I saw so many people on surfboards in ways I couldn’t even imagine.  It opened my mind to the possibility that I might be able to be surf too.  AccesSurf was a very important piece of my journey in coming to Hawaii.  I was looking for an adventure and I ended up falling in love with all the completely accepting and amazing people that I met.  AccesSurf gave me the absolute BEST working environment a person could ever hope for.  I got to go to an office every day and have mates who also got excited about chicken feed – Mel even helped me find chicken feed customers on the island!  When something tough happened during the work day, my AccesSurf office mates were there to support me and when something great happened they were right there to cheer and celebrate with me.  Thank you AccesSurf Ohana!

I’ve been with AccesSurf since Dec 2014.  I’d recently arrived to Hawaii from the South Pacific.  Cara and Craig and KK were the peeps I knew in Hawaii and they were encouraging me to go to DATB.  I wasn’t a good surfer and didn’t see how I could contribute.  I got the idea to bring a camera along with a goal to take a picture of each participant.  That turned out to be a lofty goal, but a good idea.  I deeply appreciate AccesSurf for giving me the chance to be a part of the Hawaiian community.  As an outsider it can be tough to connect in a meaningful way and AccesSurf has done that for me.

I  have clearly grown as a photographer over the last several years and my AccesSurf Ohana has been a HUGE part of that.  It’s not always easy to give up your Saturday to work behind the camera especially if you’re tired or not feeling great or the conditions aren’t cooperating and then to go home and spend the rest of the day and well into the night editing photos, but the thanks, encouragement, smiles and tears of joy drive me to put great photos out there for you all to see.  I am so thankful for that gift you all have given to me.

WE LOVE YOU BOTH SO MUCH AND CANNOT WAIT UNTIL YOU RETURN! 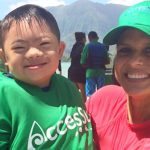 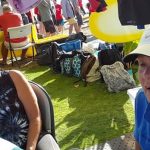