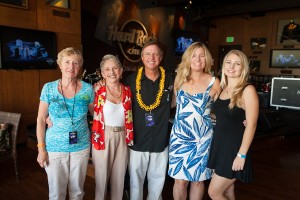 Beau Hodge has been an instrumental part of AccesSurf’s success to grow as an organization. As a former life guard and life time waterman he shares his vast knowledge and skill with our surfing and water safety areas during our beach programs.

Beau also plays a very big role behind the scenes. For the past three years he has held the position of  Co-Chair on our Board of Directors.

He is a true highlight to our organization and we are grateful for his support.

I was introduced to AccesSurf about 6 years ago at the Duke’s Oceanfest.  I was announcing the event for OC250 and the webcast and was interviewing Mark Marble while the heats of AccesSurf were in the water.  I was amazed by the athletes and the volunteer group that Mark had assembled.  Later that year during the Vans Triple Crown of Surfing at Haleiwa, I saw Mark again with the AccesSurf group.  They were a part of the Triple Crown and had their assessable mats on the beach for those with wheel chairs could use.  After promoting AccesSurf at the Duke’s Oceanfest & at the Vans Triple Crown, I had to see AccesSurf in action for myself.

Later that year, I went to one of the Day at the Beach events to volunteer and see what AccesSurf was all about.  Once I took out a participate surfing and seeing the joy in their eye’s, I was hooked.  This is a great organization doing some amazing things for people in the water. 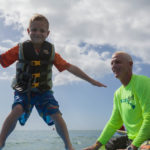