Hey – my name is Kepo’o Machado, Aka “KP”. I’m 23 years old, from Oahu Hawaii, and I’m a spinal cord injury quadriplegic. I was injured on August 24, 2011 from jumping off a rock wall into shallow water. I hit my head on the sand on the bottom just like that, everything changed.

The accident damaged my spinal cord at a very high level, c4 c5. I remember the doctor telling me that if the injury was any higher I would not have made it. But thankfully, I survived and managed to stay strong and I pulled through it. From the countless hospital stays, to adjusting to life at home, fighting infections and pressure sores, not to mention my own insecurities and depression, it’s been tough.

A lot has changed since that day almost 6 years ago. I’ve been through a lot, but I’ve always kept my faith and hoped that things will get better.

Understand I got hurt at the beach, most people in my position wouldn’t probably ever step foot into the ocean again. But for me the ocean called, and the first time I attended AccesSurf I knew. It was literally like I found the gold at the end of the rainbow, I found the place I belong.

The Injury and It’s Aftermath

After the lifeguards and emergency medical responders managed to rescue me from the water, and safely get me to the hospital – I woke up alone in what I call “Ground Zero,” or the ICU. I wasn’t able to move at all or even speak. Every hole on my body besides my ears was plugged with a tube. I was unable to eat and had to suck on sponges for water, I couldn’t talk and had to make noises to get peoples attention.

I literally had to fight my way through it, and somehow I managed to survive a month in the ICU.

After being discharged from the ICU my case manager decided I need to be flown to Shriner’s Hospital in Sacramento. What Shriners did  was teach me and my mom the basics for the type of care I needed – how to transfer to and from my chair, how to bathe, how to prevent  pressure sores, how to get dressed. I learned how to brush my teeth and feed myself again, which was very difficult and I was still very weak and struggled sometimes with it, I needed help still. All in all they did a pretty good job making sure we had the basics down, the main thing I really learned when I was there was that, even though I was going through was so much, I realized while I was there it could have been a lot worse.

The period after returning from Shriner’s would prove to be the most difficult of my life. A series of infections meant nearly an entire year spent in the hospital. Pages and pages could be written about this time period alone.

In between time in the hospital, life at home was a challenge. The demand of my care started to be too much for my mom, mind you all the basics things I mentioned that Shriners taught us she was doing all on her own – there was no other help.

The next few years would be a constant series of severe infections, extended hospital stays, procedures and constant challenges.

Finally, about three years after the accident – Im home. All my wounds completely healed and now I had a caregiver too, that helped me a lot. So now that I’m all healed up the first thing I decided to do was get into therapy again. I set my sights high – a manual wheelchair, maybe doing my own transfers, but when I sat down with the physical therapist to talk about my goals his response wasn’t what I wanted to hear. He told me that my goals weren’t realistic and that since I didn’t have certain muscles here and there, I was only going to plateau and not get any better. In the summer of 2014 I managed to find a new physical therapist that ironically I had met while being a patient in rehab, Sergio Florian, who now till this day I call coach. From this hard work with coach, Quadlife, my movement to spread positivity was born.
Turning the Corner & Discovering AccesSurf 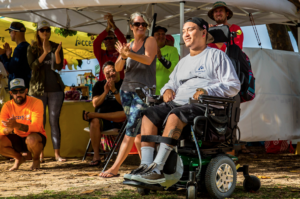 I’ve been through a lot, but I’ve always kept my faith and hoped that things will get better. I had been working with Sergio for about 7 months, and with all the work I put in I managed to check off one of the goals on my list – that first Saturday of that month of January in 2015 I made it to an event by AccesSurf called ‘Day at the Beach.’ It was literally like I found the gold at the end of the rainbow, I found the place I belong. And ever since then every first Saturday of each month I make it a point to get there and show my love and support.

Every month before AccesSurf comes I literally train as hard as I can in preparation for the ocean, just like a pro surfer I’m training for it, me and coach practice balance and laying on my stomach in prone position so it simulates laying on the board. We work on strength and coordination so that I can hang on when the waves break on me. We work on cardio so that If I do fall off the board I can hold my breathe.

I’ve been going to AccesSurf for 2 years now. Every month I’ve been putting in the work with coach to show others that you can do it, whatever you put your mind to, it’s not gonna be easy but it’s possible. Every time my skin touches the water it reminds me to keep working hard. When I take off on a wave, it reminds me that this is what I’m suppose to be doing.

All the trials and tribulations I’ve gotten through from getting hurt, to the ICU, to getting sick, hospital stays, pressure sores – everything only made me that more wiser and stronger.

And now I’m doing everything I can to maintain and progress. This is what my movement Quadlife is all about. Inspiring change that makes a difference, and I live it everyday.
I lead through example, I take it one step at a time and do my best to just be the best person I can be, hoping that it’ll inspire another to make a change.

AccesSurf is the place I can come to and be myself while  around amazing people. This place is my family, and I appreciate everyone that makes the time and gives of themselves as part of this community.

AcceSurf is truly something special and I’m very grateful and honored that I’m apart of the team. So with that being said if you do get a chance to come and join us, please do.

My name is KP, and I hope to see you at the next event. Much love, live Pono, and stay blessed. 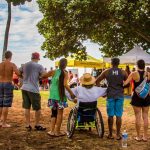