This month we are excited to share the story of our main man, Kevin! Kevin is one cool surfer dude, and is always the life of the beach party. We are honored that Kevin wanted to spend his “gotcha day” (a term for the anniversary of the day on which a person joins a family by adoption) with us this month. Once he got on the microphone in front of our entire community he was such a natural public speaker, getting the whole group to laugh and smile.

So with that here is Kevin’s story, as told by his adoptive mom Sharon:

When we received Kevin’s referral during the summer of 2003, all we saw was his smile. He was born with bilateral cleft lip and palate. On our first evening together the hotel’s restaurant had a show featuring Russian dancers. 22 month old Kevin looked at us, looked at the girls, broke into his trademark grin, and just started clapping and dancing – and he’s been smiling and dancing ever since.  In middle school in California, he was the only boy in dance and he loved it! He did a solo in their recital to ‘Shake It Off’ from Sing – and got a standing ovation!

He was diagnosed on the spectrum in 2010. Between his speech and autism, making friends doesn’t come easy for him, despite his very outgoing extrovert personality. In December of 2017, we moved to O’ahu. Gloria Niles, an AccesSurf volunteer, recommended AccesSurf. In fact, Gloria once mentioned that her students were asking her if the boy who dances would be at White Plains the following week.

I can’t keep track of all of his surgeries (he has another one on October 22) but he has such a good attitude. One of his first questions after his bone graft surgery at Kapiolani during Summer 2018 was how soon he could go back to AccesSurf!

AccesSurf allows Kevin a group of friends, an ohana that accepts him for him. We might take it for granted, but that … acceptance is a true gift.” 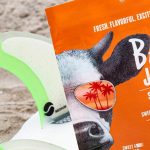 The Start of A Flavorful Partnership!News 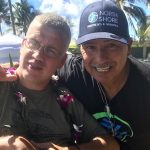