While Woody is still fairly new to the AccesSurf ohana, it feels like he’s always been with us! Woody stood out from his first event, showing he was willing to go the extra mile to help out. Aside from helping out in the water, Woody began sharing his photo and video skills with us, assisting Jason Rose. That’s why we don’t have a lot of photos of him, he’s pretty much always on the other side of the lens! He’s captured some great photos for us, and even made some really cool short videos. But as he mentions below, helping out at events just isn’t enough, and he’s even volunteering his time as our new Treasurer.

Here’s Woody’s experience with AccesSurf in his own words:

The first time I heard about AccesSurf was when my Wife mentioned it to me. I kept meaning to check it out but it wasn’t until I ran into Cara in December of 2016 and told her that I couldn’t volunteer that month but I would be there in January. When January came around I went to my very first AccesSurf event and absolutely fell in love with it! I had finally found a volunteer organization that said they wanted to help people, and then actually helped people!
After that first Day at the Beach, I decided I wanted to do more for AccesSurf so I began assisting Jason Rose with photography. After doing that for a few months, I decided I wanted to do even more for this amazing organization so I threatened Cara with an office sit-in until she gave me more to do! AccesSurf feels like home, from the people to the events, to the amazing services that this organization gives; everything is amazing and I am incredibly honored to be selected as Volunteer of the month.

Here’s a cool video from our April Day at the Beach Woody put together for us!
Volunteer of the Month: Woody Bell2017-05-292017-05-29https://www.accessurf.org/wp-content/uploads/2020/02/ash_mainlogo-2.pngAccesSurf Hawaii Nonprofithttps://www.accessurf.org/wp-content/uploads/2017/05/woodybanner.jpg200px200px
Like Our Facebook Page!
Forms
Follow Us On:
Contact Us
View Calendar 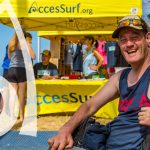 E Komo MaiVolunteer of the Month